We have a number of the watches featured in this catalogue available for purchase from this site, including two spectacular examples complete with box and papers.

Direct links to the examples with box and papers  –

A word on catalogue numbering, and a mystery solved (updated February 8th 2019)

For some time now there has been considerable confusion over the history of the Seiko catalogues from the mid-60’s onwards. However, following a recent research visit to the Seiko Museum in Tokyo, we believe we have now got to the bottom of the mystery.

The confusion arises due to the way that the catalogues are numbered, and the rarity of the very early examples, which we now believe led to a misunderstanding of exactly what was and was not published.

What we couldn’t find in the museum archives – nor have we ever seen for sale – were two catalogues that we naturally expected to exist. A second volume for 1966, and the first volume for 1967. One other “odd” thing regarding these early catalogues is that there exists a “supplement” to 1966’s No. 1. This is the only example of the “first” volume from a year having a supplement – all other examples were published as supplements to volume 2.

The above discoveries (and lack of discovery of the “missing” catalogues) has led us to an inevitable conclusion.

The lack of a volume 2 for 1966 could be easily explained simply by the fact that the Seiko range wasn’t expanding quickly enough to warrant publishing one. But why no volume 1 for 1967?

And the answer to that question becomes obvious when you look at the cover of this catalogue – it doesn’t mention the year anywhere on it!

It is our belief that Seiko made the decision to start publishing an ongoing series of annual catalogues, commencing in 1966, and that the catalogues in that series would be sequentially numbered without reference to the year of publication. To introduce references added to the range later in the calendar year, a supplement to the original catalogue detailing just the newly introduced watches would be published.

With the extremely rapid growth of the company in the late 1960’s (refer to the graphs presented in the 1971 diary), it would have become evident that this catalogue publishing strategy simply couldn’t keep up with the ever expanding range of product, and so Seiko switched to a new strategy of issuing two main catalogues per calendar year, numbering them 1 and 2, and also – where required – issuing a supplement to the second edition. Each main volume of the year’s catalogue would present the full range available for that half-year.

Whilst there is only a single photo of a Grand Seiko in this catalogue – used to represent two variants of the reference – there are a number of fascinating things to be learned from the page on which it is featured. As we are about to discover, things aren’t quite what they seem at first glance.

The photograph shows a 57GS series reference – specifically, it is the 5722-9990, and an early example at that. We can tell this from two subtle things noticeable in the photograph.

Firstly, the main textual content on the dial matches that of the 43999 and 5722-9990. The way we can tell it is the 5722-9990 and not the 43999, is because whilst the dial code at the bottom is not legible, the structure of the text around the 6 o’clock index is clear. Note that there is very little text to the left of the index, whilst that to the right stretches almost all the way around to the 5 o’clock index. 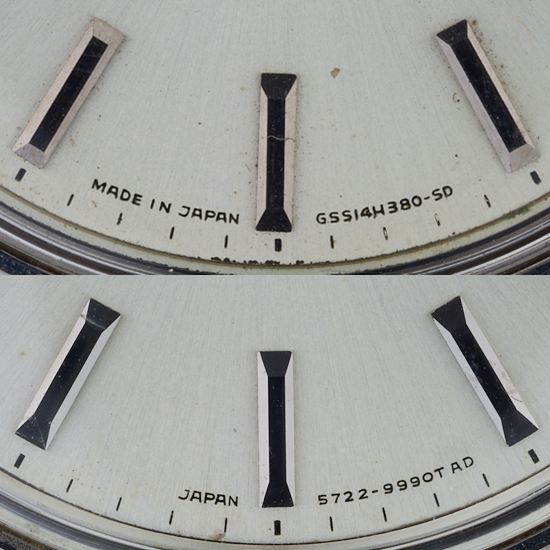 Looking carefully at the catalogue, it is clear from the text to the left of the 6 o’clock index – even though not legible in the low resolution printing – that the photo is of the 5722-9990.

The second thing of interest about the image enables us to identify it as an early example of the 5722-9990 – certainly much earlier than the latter half of 1967 when the catalogue was published.

Whilst it is not clear exactly when, at some point during the production of the 57GS series – which started with the 43999 SD dial varient in the last quarter of 1963, and continued through to 1968, by which time the steel cased examples were on their third and final iteration, the 5722-9991 – the design of the crown was changed. 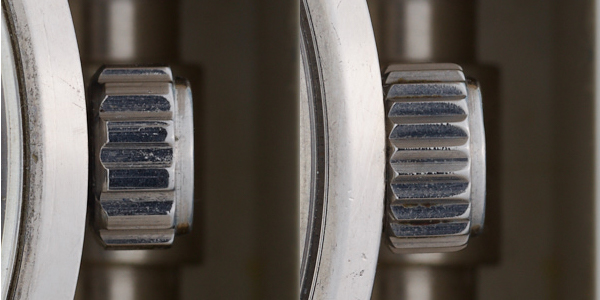 On the left is an example of a coarse knurled crown, and on the right, the fine knurled.

These crowns are interchangeable, and indeed they even share the exact same part number (55W31N), so clearly at some point in the production life Seiko simply superseded the part with a different design. Given that they share the same part number, it is not surprising to find examples of 43999’s and 5722-9990’s with the later fine knurled crown, rather than what we could consider to be the “correct” coarse knurled example. For any example of the 57GS series watch being serviced after the mid-1960’s, only the fine knurled crown would be available if a replacement needed ordering.

The image in the catalogue clearly shows a watch with the earlier coarse knurled crown. We would consider this to be the correct crown for the entire run of the 5722-9990, but at the very least, it would identify the watch photographed as being an “early” example of the reference. 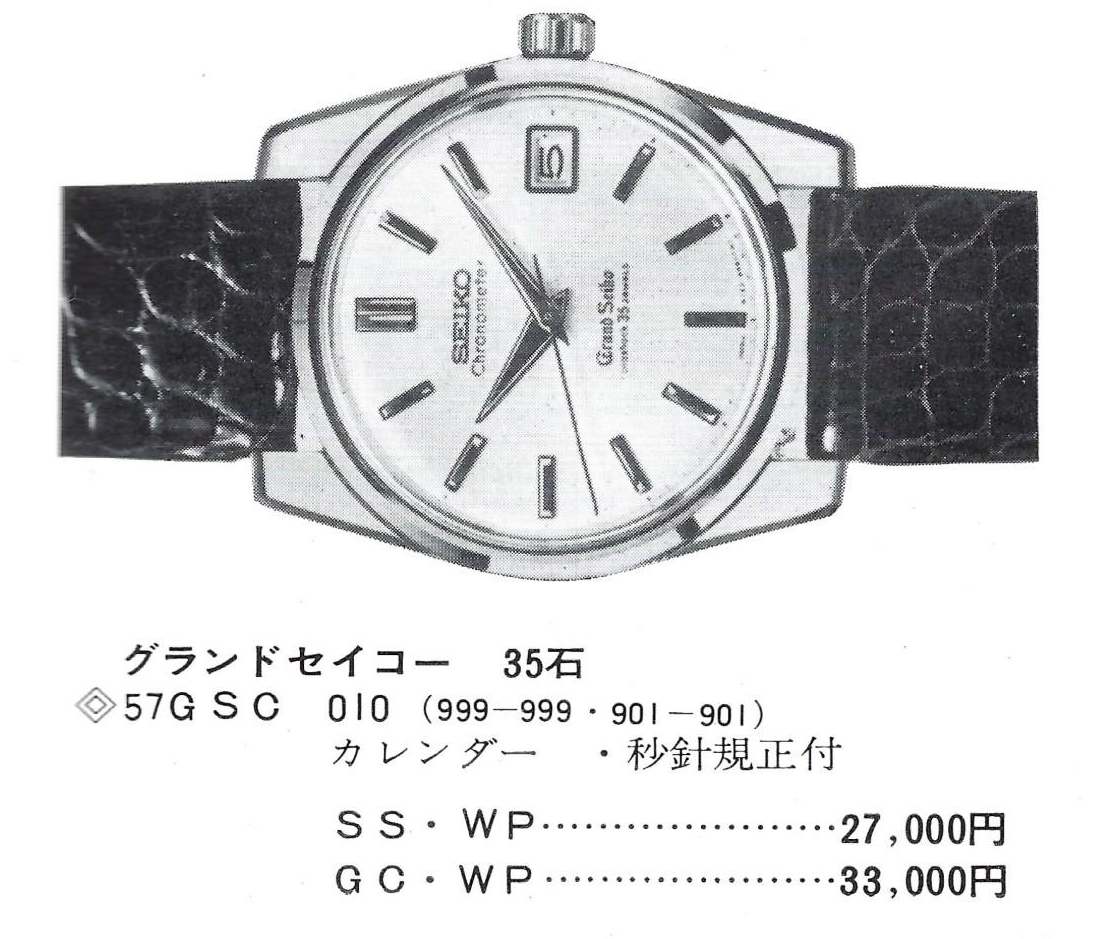 The fact that a catalogue from late 1967 shows an image of an early 5722-9990 and not the contemporary 5722-9991 is probably simply down to Seiko being a little “lazy” with their product photography and not updating the catalogue shots with photographs of the most current variants. Based on the production dates – as provided by the first two characters of the case serial numbers – of countless 57GS series watches we have seen, were you to have visited a retailer in the latter half of 1967 to purchase a 57GS, we suspect the reference available would have been the 5722-9991.

As we will see when we publish the next post in this series of catalogue scans – that features scans from volume 1 of the 1968 catalogue – this was the last time a Grand Seiko with the word “Chronometer” on the dial was featured in the publications.

The first row of the catalogue shows two watches – 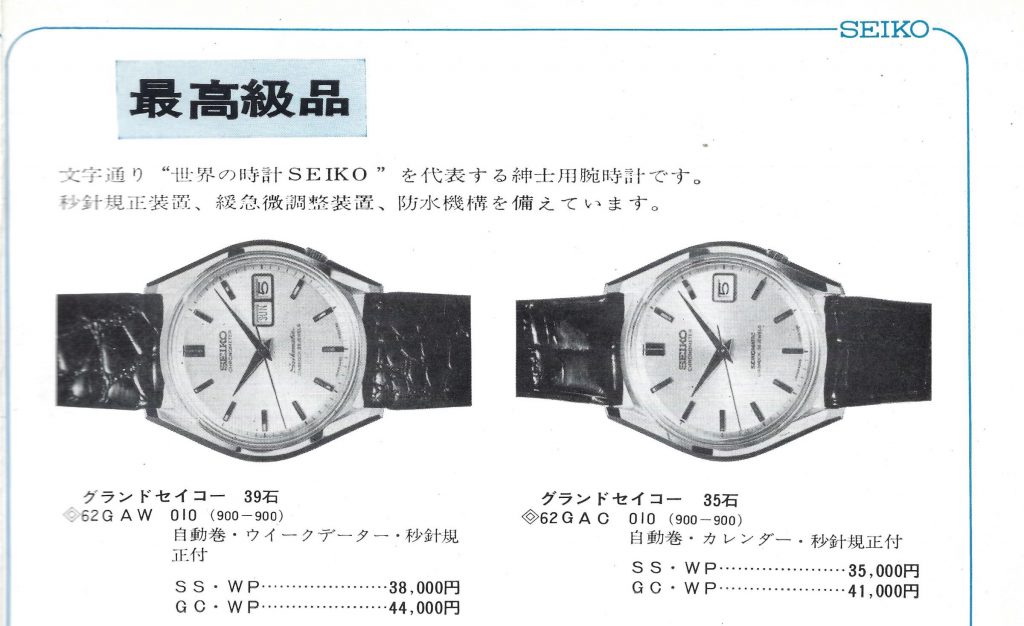 Now, this is where things get a little complicated.

However, if we look at the catalogue codes detailed for the watches, we discover that they are Grand Seiko catalogue codes. 62GAW 010, and 62GAC 010.

The first two characters of the indicate the movement series, but it is the third character, “G”, which is crucial, and identifies the watch as being a Grand Seiko.

For those who can read Japanese, it’s even more obvious that what Seiko are representing in this catalogue are the 62GS references, as the Kanji text above the catalogue code translates to “Grand Seiko”.

So – whilst there is only a single photo of a Grand Seiko shown in this catalogue, representing two case material variants of the same base reference – there are actually four other Grand Seikos detailed, but illustrated with the wrong watch.

We consider it highly unlikely that Seiko were actually selling the Seikomatic Chronometer as a Grand Seiko to the general public – it just seems too weird a thing to do from a marketing perspective. But clearly the catalogue would imply the opposite. A “regular” Seiko is pictured alongside catalogue codes and descriptions clearly indicating “Grand” Seiko. Is this just a mistake, or perhaps – as evidenced by the 5722-9990 pictured in the catalogue – were Seiko being a little lazy with providing up-to-date product photography for the catalogues?

If anyone has any further insight into this, please do get in touch. Probably the only thing that would prove the Seikomatics were actually being sold “as” Grand Seikos would be if someone could provide an example of a Seikomatic Chronometer with Grand Seiko paperwork (the certificate for the 62GS series does include both case and movement serial numbers on it), but we rather doubt such a thing exists.

The 62GS series actually had a total of nine variants over its short lifespan.

The first eight variants are relatively simple to explain. There are  two movements – the day-date 6246, and the date only 6245; two case materials – stainless steel, and gold cap; and two different versions of the case back medallion – one featuring a lion, and one the GS logo.  All combinations of these variants exist, and so 2x2x2 gives us 8.

The final variant is very rare – it’s a 6246-9001 featuring different hands and indices.

The 1966 production -9000 watches are generally considered to be the more desirable as they have the lion case back medallion, rather than the GS logo featured on the 1967/8 production. 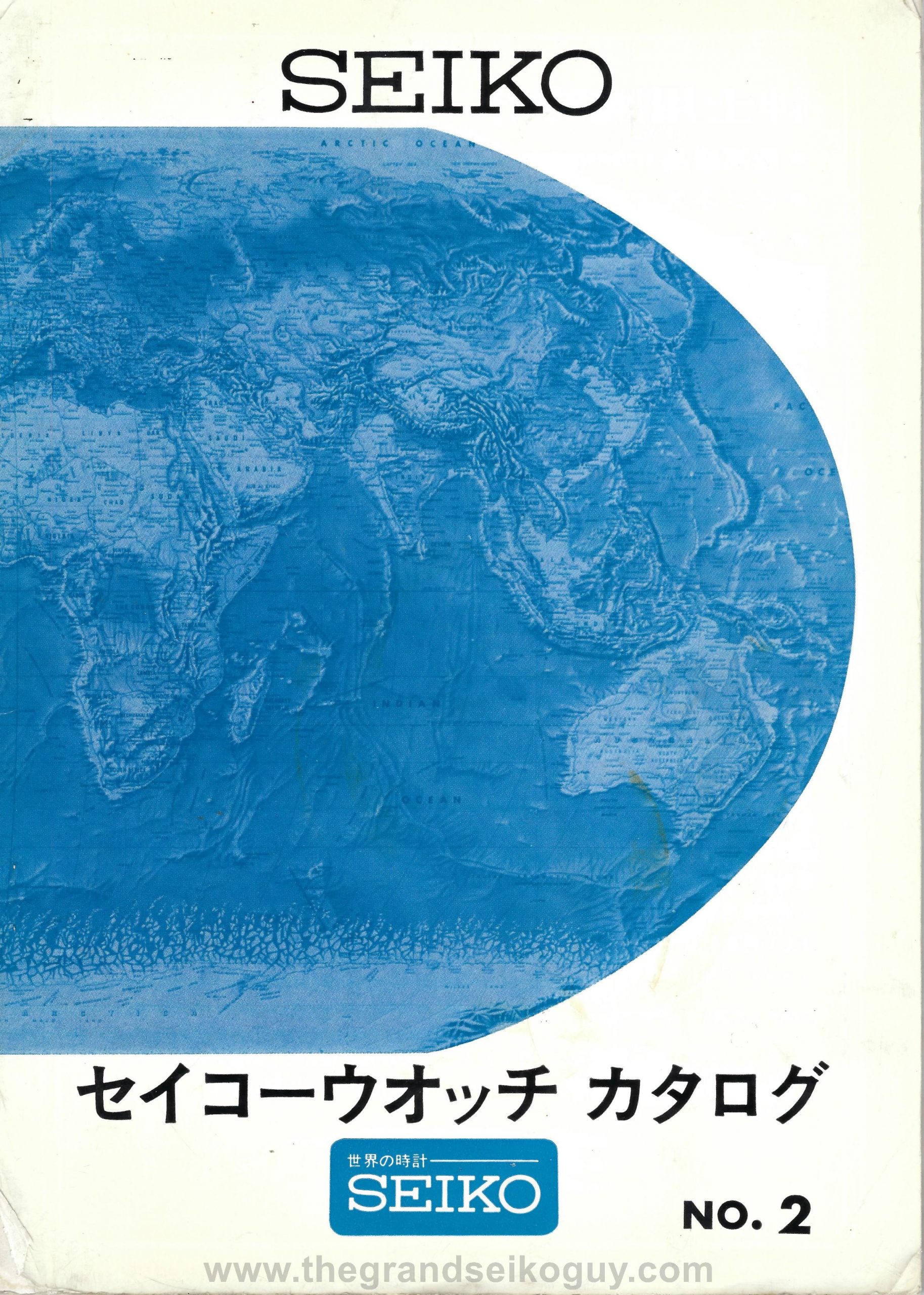 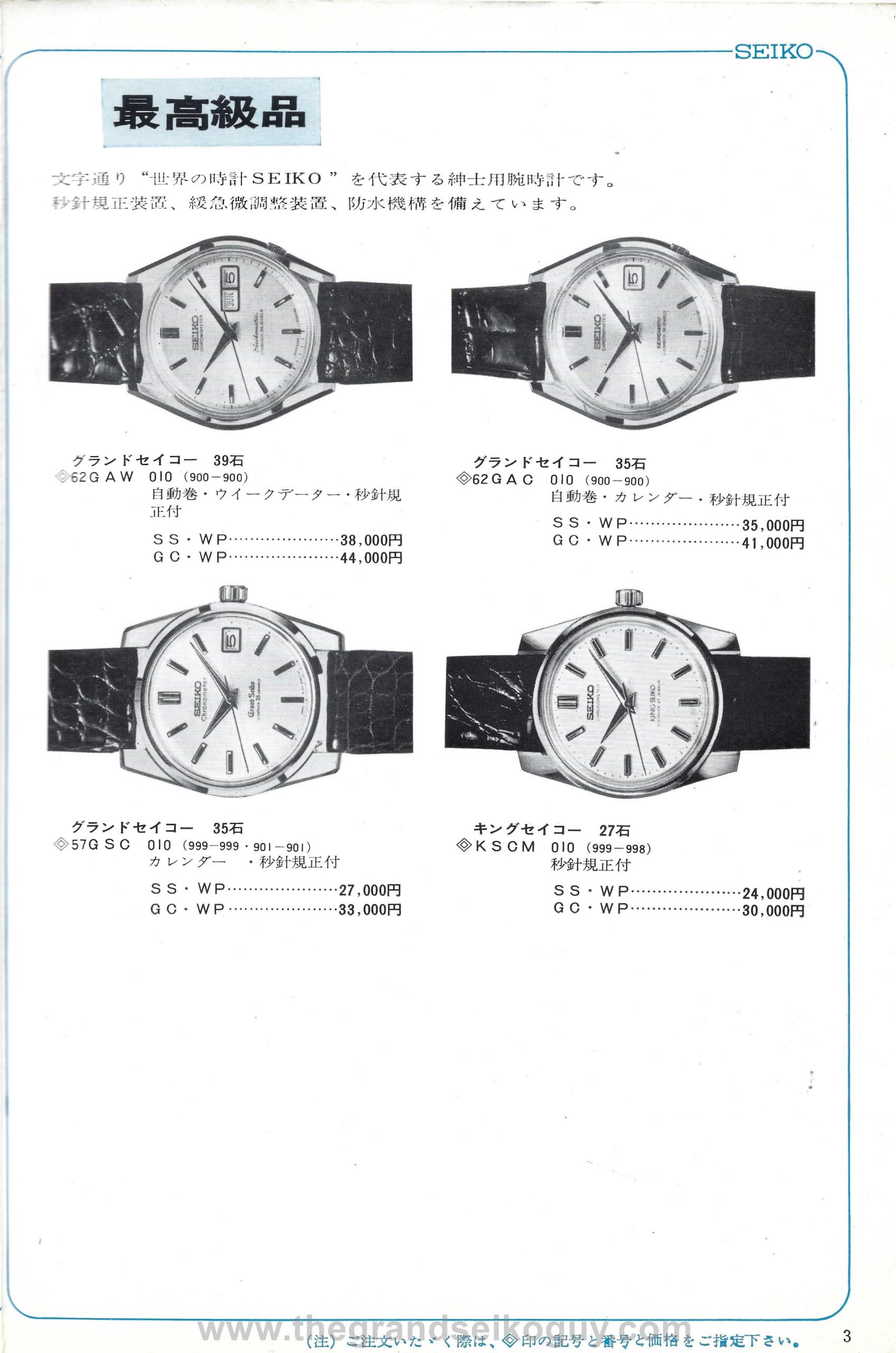